Norway Calling – Ric writes about the lure of Norway

The combination of mountains and sea has always seemed like the perfect landscape.

The sea has always been in my life, even before mountains and climbing. I spent a childhood on the south coast of England culturally immersed in ‘our island story’ of nautical derring-do, and backed up with family seafaring anecdotes.  The sea was ‘just there’; something to look out to that framed my world.

Becoming a mountaineer took me somewhere new. I explored the hills and mountains of Britain, then the Alps, the Andes, the Himalayas. I found myself connecting with mountain lives and landscapes that could not have been further from the coastal world I grew up in, but was unquestionably where I wanted to be, and felt comfortable.

Even throughout all the climbing, the sea still provided a calm backdrop.  After time spent in mountains the best antidote always seemed to be to get out to the coast. Bigger life decisions often pulled into focus after a walk on the beach. Making North Wales my home seemed like the most natural decision, bringing the two worlds together : climbing and mountains, all by the sea. I still think that sea cliff climbing is the best there is…

The last piece of the jigsaw in terms of my own skills, in becoming the mountain person I wanted to be, was following the passion for skiing and snowboarding. A number of years living in the Alps were amazing. It was the place to develop skills, but was also a time spent away from the sea and missing it, with just the odd holiday and trip back.

Then came Norway. In 2012 I’d never even been to Oslo. I’d heard a lot about the summit to beach skiing in northern Norway, and the growing notoriety of Lyngen Lodge. It looked incredible and I just really wanted to get some of it. It sounded like an opportunity to bring the most ‘mountain’ of skills to a coastal environment, and find that perfect balance. 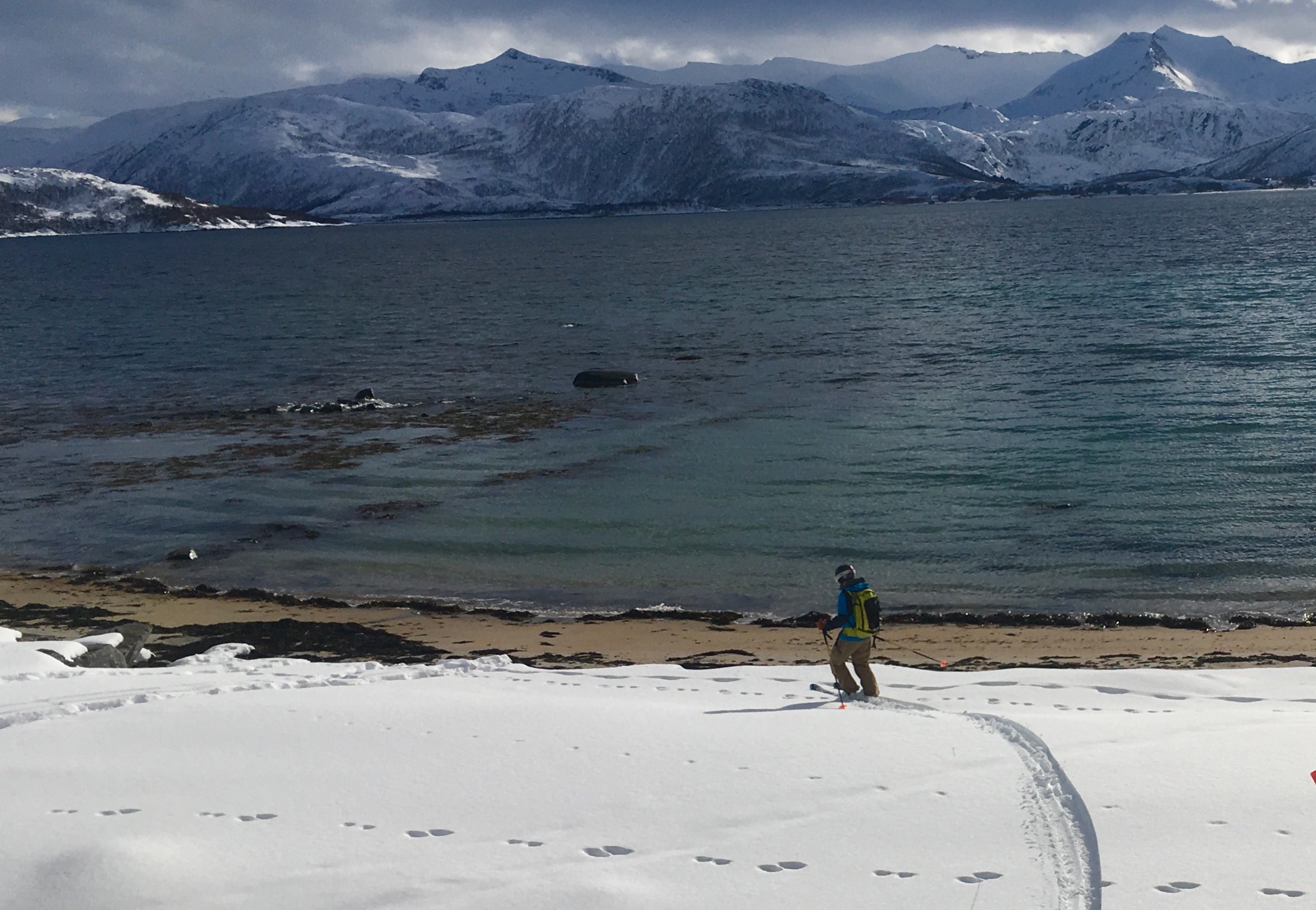 Arriving in the Lyngen Alps for the first time was like a homecoming. The fjord landscape, with snowy mountains to the water’s edge, had echoes of North Wales, Scotland, and the Alps too. Somehow it brought it all together : the sea, the highlands, the Alps, mountaineering, skiing, snowboarding…all in one place.

On that first trip with a group of friends, we skied to the beach, we took photos of blue sky and powder with the sea below, we ate a lot of fish, we relaxed in the sauna, we met the locals. It was a ball.  We went in April and it was a great antidote to the bustle of Chamonix at Easter. There were no queues or lift tickets to buy. The snow remained unaffected by the sun and it didn’t really get properly dark, so there was no rushing anywhere. Just mountains, sea and snow, and a lot of time.

I’ve been back every year since, often for 2 or 3 weeks, either with my guided groups, or with family, checking out new places. Each time I just love the simplicity of it. You get up, get ready , put the skins on, climb a mountain, ride back down. Relax and refuel. Plan the next day. Press repeat. At some point you go home, but you just want to keep doing it.

Like in many mountain areas, once you visit a few more times you can get a little further below the skin. Some of the tours are so good that I’ve done them many times with different people. Always there’s a something new: a different summit, or a little change to a tour we did before; maybe a slightly better way, or little combination that improves the day, or just different snow or a little boat trip drop off. Either way, it’s never the same twice.

There is just so much of it. Each time I fly in or out of Tromso I’m amazed by the sheer number of ski peaks that fill thousands of square kilometres up there. I’ve gradually and slowly been exploring some more of what arctic Norway has to offer: Narvik, Senja , Lofoten, Svalbard, just to get into that landscape, to learn more, to see more, to find the other places.

What started as an annual trip to Lyngen is now morphing into a ‘Norway program‘. Some of the exploratory trips are now fully researched and we have trips to Lofoten, Senja and Lyngen.  There’s also a trip to Svalbard this year which I thought of as a ‘one-off’…but maybe not!