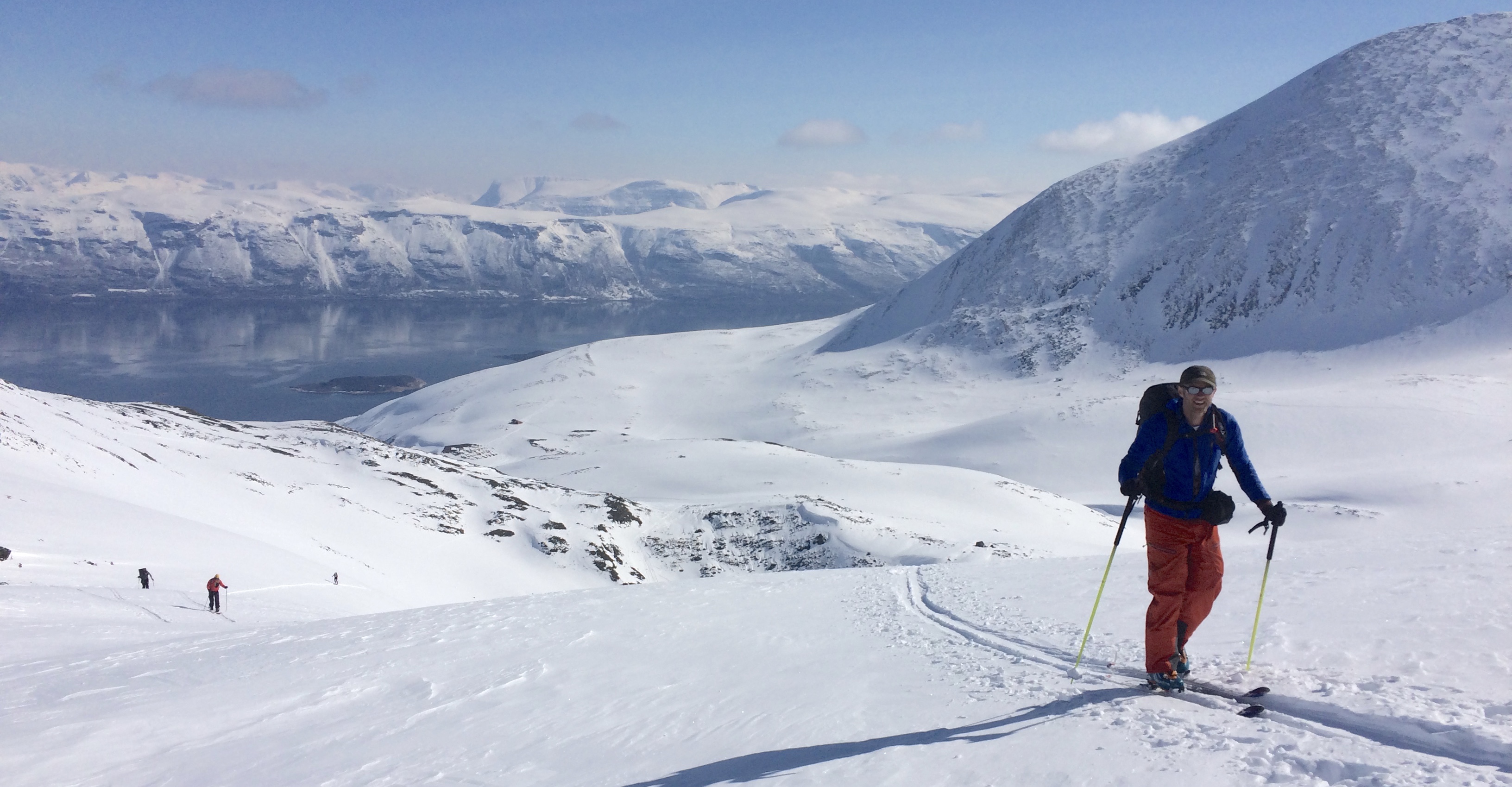 Why the Lyngen Alps?

The Lyngen Alps is an area of mountains, islands and fjords above the Arctic circle in Northern Norway, west of the northern city of Tromso, which is a 90 minute flight from Oslo.  It is a wonderful area that has become popular with ski and splitboard tourers in the last few years. The scenery is reminiscent of the Scottish highlands (with more snow) but is bigger in scale, and often steeper, like the Alps. There are a few glaciers, and the highest summits reach around 1500-1800m altitude. A lot of the tours climb straight up from the coast, or the roadside, without long valley approaches, making them ideal for ski tourers and splitboarders.  There are no lifts at all so you have to earn all of your turns here. There are ferries, boats and roads running around most of the coastline and that gives us many options for accessing different areas

Read why Ric loves Norway so much- and you will too!: Norway Calling- Ric writes about the lure of Norway

What will the trip involve?

Most days involve 3-4 hours of skinning as all the peaks involve 1000m-1500m of ascent, but the effort will be rewarded with great descents from Arctic summit to the beach, and unlike the Alps there is no altitude to worry about!  The higher part of the mountains are on open hillsides, but small trees adorn the lower slopes, making tree laps an option if we get any bad weather days. We will make daily trips to climb different mountains in and around the Lyngen peninsula, returning each night to the accommodation .  Most of the tours don’t require the use of ice axe and boot crampons, however we have used them occasionally.  Glacier tours are among the possibilities for a varied week of peak bagging, or simply seeking out good descents.  We will have a minibus for transport so that we can make the most of the conditions on the day. We may use a boat to access some areas if the conditions and weather allow.

To make the most of this trip you need to have a reasonable level of aerobic fitness. The pace is never fast, but just to ascend steadily for around 1000m+,  for 6 days in a row, does need a little prior training of some sort – so the more walking, cycling, running or even skinning you do on a regular basis the easier it will be. For the descents, the main thing is that everyone is roughly compatible. Relatively inexperienced off piste skiers can enjoy skiing here, and so can experts, so it depends on the group. In general I try to attract reasonably confident off piste skiers to these Norway trips, so most people are happy skiing linked turns down any terrain or snow type, up to around 35 degrees steepness.

The cost of the trip includes everything once you arrive in Tromso, apart from boat taxis, insurance and personal spending.  The transfer bus will pick you up from the airport and bring you to the accommodation in Lyngen.  We stay in log cabins near Lyngseidet, a small village on the east side of the Lyngen peninsular.  The cabins are comfortable and warm; they have a communal living space with some twin share and some open plan mezzanine-type sleeping area, with a shared bathroom and underfloor heating.  All meals are provided next door in an amazing Viking style log house, and there is a firewood sauna to ease the muscles after the day’s hard touring.  Food is plentiful and features local dishes cooked by our hosts Gunn and Haakon.

Here’s a  film from our Norway trips in April 2017 to give you a flavour of touring there. The film is of Lofoten and Lyngen but the majority is of Lyngen.