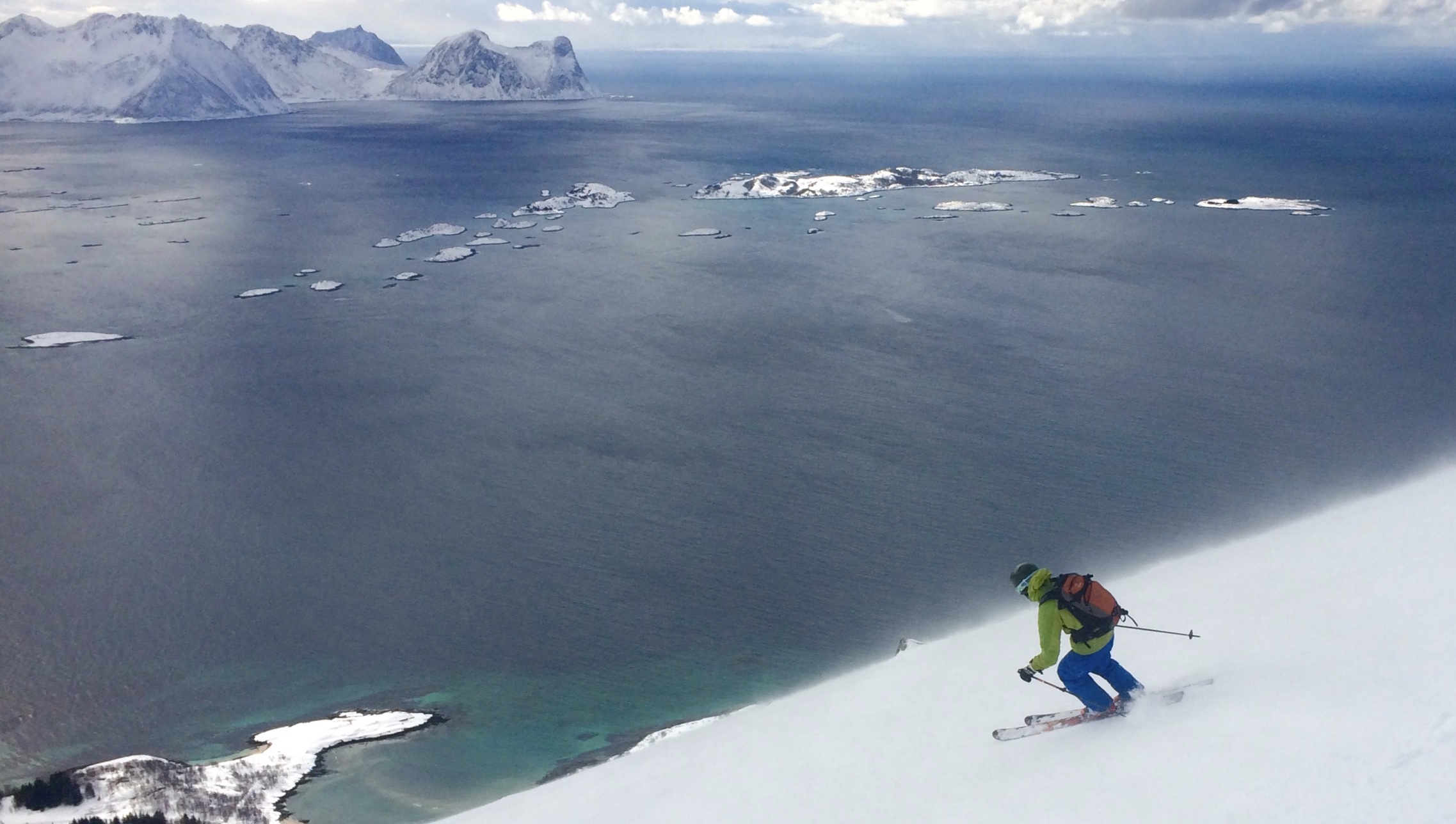 Senja is a compact, yet spectacular gem of an island a situated a little south of Tromso, in the north of Norway, up in the Arctic circle.  Norwegians often describe Senja as “Norway in miniature” as it has all the elements of this diverse country. The mountains are non-glaciated and reach a maximum height of 1000m above the sea. The summits are quite rocky and steep, but also offer good terrain for touring among this spectacular backdrop at all times.

Ascents are generally a little shorter than in the Lyngen Alps, but can often be extended, if desired, by combining a couple of summits, or doing a second lap if the snow’s good.  So, for example we might do a 700m ascent of a peak, have a 400m run off the other side, and then climb back to the top , before a longer run back to the bus.  Another option is to enjoy the slightly shorter day and come back for a dip in the Arctic sea followed by a sauna!

It’s a fine place to tour with some excellent summits and viewpoints, often with sea on three sides and often giving descents in untracked snow and few other tourers. From where we stay there are a number of great tours within a short drive, with even more to explore within an hour or so, in different parts of the island. The terrain is suited to both skiers and splitboarders as there are normally straight up ascents, with very little traversing along valleys.

Read why Ric loves Norway so much- and you will too!: Norway Calling- Ric writes about the lure of Norway

We stay in the small village of Mefjordvaer on the northern coast of Senja.  Accommodation is in newly renovated fishermen’s cabins, which overlook the sea, with a spectacular backdrop of Senja’s mountains. Local dishes are provided next door in the bar/restaurant where we will have breakfast and dinner every day, and the hot tub and sauna are just a step away.  We can often enjoy fresh fish straight off the boats, which come in just outside the accommodation, and the cabins themselves are warm and comfortable places to relax after the day’s touring.

Ski and splitboard facilities on Senja are almost non-existent, so it’s easier if you have your own equipment, however, if needed, some hire is possible from Tromso, or from the UK. Alcohol is expensive in Norway, so if you like a glass of wine at the end of the day bring some duty free. Vegetarians can be catered for, especially if you eat fish, vegans may struggle a bit unfortunately, so would be worth bringing extra or self catering if you are vegan.

Travel is by air to Oslo from most major UK airports, and then on to Tromso. From the airport we travel by road for 3 hours to reach Senja.  The flights are with SAS or Norwegian.

Included in the cost is transfer to and from Tromso airport, all travel around Senja, all twin-share accomodation in beautiful fjord side rorbu-style houses and meals for 7 nights, and guiding by an IFMGA Ski and Mountain Guide for the week. Excluded from the cost is air travel to and from Tromso, insurance, personal spending and any extras such as boat taxi.